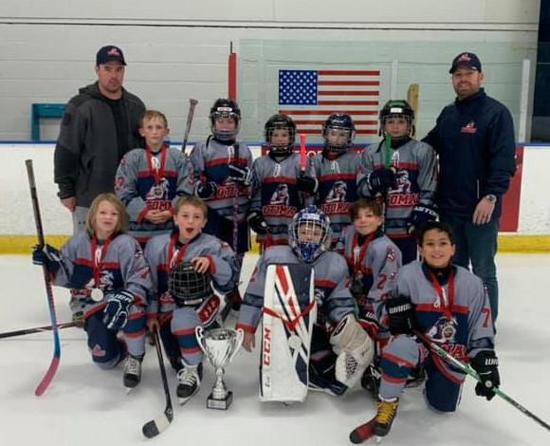 The U8 Mites (Chambers) squad traveled to Hershey, PA for the Halloween Howl tournament on the weekend of October 25, 2019. The squad has four players who won the Championship at the same tournament last season and they were anxious to win it again.

The Mites took on the Lehigh Valley Phantoms in their first game and won 7-5. The team gained confidence and went on to beat the Palmyra Black Knights 11-3 on the following day. Their third matchup proved difficult as they lost 11-0 to the Long Island Arrows. However, they made it into the playoffs as the fourth seed.

The Pats took on the number one seed, Reading Independence, and fell behind in the game. Coach Chambers rallied the troops and Potomac roared back to win the game 6-4. The Championship matchup pitted the Patriots against the Long Island Arrows. They kids battled hard despite losing to the Arrows by eleven goals in the preliminary rounds. Potomac lost by a final score of 5-2 but proved that they have heart and are ready to compete against any team they face.

Congratulations to Coach Chambers and the rest of the team on their second place finish. They brought a shiny silver cup back to Prince William and will display it with pride.